My husband and I have been watching True Blood since it started and, when it first came out, he bought all of the books the series is based on. Known as either the Sookie Stackhouse novels or the Southern Vampire Mysteries, the books, like the show, are set in a world were vampires are real and out in the world, and star Sookie, a petite, blonde waitress with the ability to read humans' thoughts. My husband read the books right away, but I resisted, as I was not sure that I would enjoy them, having already gotten to know the characters via TV. Eventually, though, I caved, and have been reading them in quick succession. They are pretty easy reading, and don't take too long to get through.

In the first book, Sookie meets Bill, the first vampire to move to Bon Temps, the small Louisiana town she lives in. He's from Bon Temps, too, but left after becoming a vampire after the Civil War. Sookie falls for him, hard, after she realizes she can't hear him think, which is a nice change for her. Then dead girls start showing up around Bon Temps, and while some people want to blame the vamps, Sookie knows Bill wouldn't do such a thing. So she starts listening in on customers at her bar, trying to figure out who did it, before she's next. Dead Until Dark is a really fun way to kick off this series, and definitely made me eager to read the rest.

In Living Dead in Dallas, Sookie is attacked by a mysterious supernatural creature, and her co-worker is murdered . But before she can do anything about either of these issues, she and Bill are hired out by Eric, Bill's boss, to vampires in Dallas to search for a missing vampire. There, she gets tangled in the snare of an anti-vampire church, the Fellowship of the Light, and discovers just how many other supernatural beings there are who might want to take a bite out of her. This book was a little disjointed to me, as there were two different storylines (one in Bon Temps and one in Dallas) with nothing much to tie the two together. But it was still a lot of fun to read.

In Club Dead, Bill messes up, big time, so Eric sends Sookie to Jackson to look for him, under the care of a werewolf named Alcide. As it says on the back of the book, "when Sookie finally finds Bill - caught in an act of serious betrayal - she's not sure whether to save him...or sharpen some stakes." I really liked the complications the new characters and situations brought to this book, and I thought it was a good story.

The inevitable question, of course is: how do the books stack up against the TV show (or vice versa)? Normally I much prefer the book over the movie/TV show made from it. In this case, though, I'm not so sure. I like them both, a lot. For one thing, while the first season of True Blood was based on Dead Until Dark, and so far, the second season is based on Living Dead in Dallas, the books have almost as many differences from the show as they do similarities. Its a little bit like trying to compare apples and, well, maybe not oranges, but pears, at least. So its easier to keep them separate and enjoy each for what they are. Plus, this doesn't hurt: 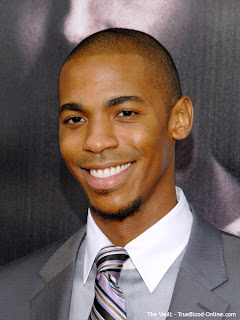 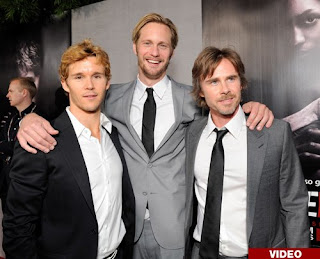 I love to get comments and welcome them on any of my posts. There is comment moderation on posts older than 14 days, but your comments will appear immediately on current posts.

Due to th eabsolutely insane number of spam comments I have been getting recently, I have unfortunately had to turn on word verification. Please email me if you have problems posting a comment.