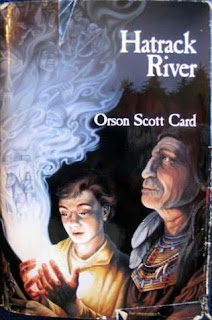 Hatrack River is a collection of the first three books of Orson Scott Card's Alvin Maker series. The series is set in an alternate Colonial-era North America, where familiar historical figures (Ben Franklin, William "Tippecanoe" Harrison, poet William Blake) show up as alternate versions of themselves. In this world, many people have a "knack," an ability to do some task beyond normal ability, and folk superstition is real.

Seventh Son: The Tales of Alvin Maker, Volume I: In this book, Alvin is born, the seventh son of a seventh son, as his family heads to the frontier (what is today Indiana). He has a great power, beyond even most knacks. He has enemies, both human - the Rev. Thrower - and the supernatural - the Unmaker, who tries to kill him at every turn. But he also has allies, including Taleswapper (William Blake) and the "torch" Peggy, who assisted at his birth.

My Thoughts
I really liked being introduced to this world. It was interesting to read about people and events that are like what I know, but not quite, and the plot was fun to read. Altogether, I really enjoyed reading Seventh Son and looked forward to reading the next chapter in Alvin's life.

Red Prophet: The Tales of Alvin Maker, Volume II: Alvin Miller heals a one-eyed "Red" of his painful memories, allowing the "Red" to become "the Prophet," Tenskwa-Tawa, who preaches pacifism and believes that "Reds" should live west of the Mississippi and "Whites" should live east of it. His brother, though, Ta-Kumsaw, rallies "Reds" behind his belief that their land should be defended violently. Alvin and his brother Measure get caught up in the middle of it when they are kidnapped by William Harrison to provoke war.

My Thoughts
As I said, I was really looking forward to this book. Unfortunately, I was somewhat disappointed by Red Prophet. I didn't mind that so much of the story focused away from Alvin or that this a serious, sad story, but I did mind how heavy-handed much of it was. It was not nearly as compelling a book to read as Seventh Son. Still, it was interesting enough to keep me wanting to read the next book in the series.

Prentice Alvin: The Tales of Alvin Maker, Volume III: Alvin has returned to the town of his birth to become the blacksmith's apprentice. But he must also learn the difficult arts of a maker and hopes that Peggy, the torch, can help him. But Peggy leaves before Alvin arrives to find her own way. Alvin, though, befriends young half-black Arthur Stuart, the son of a slave and a slave-owner, who has been adopted by the owners of the local guesthouse.

My Thoughts
This was a difficult read. The part of the story that covers Arthur's personal history is horrifying and makes for some very uncomfortable passages. But it's worth bracing yourself to read. The book is thought-provoking and powerful. Seeing Alvin come into his own was interesting and as Peggy develops into her own, the story opens up more, which I liked.

Overall, I'm glad I read these three books. Card has created a fascinating world so much like our own but yet so different. I highly recommend Seventh Son to readers of all ages, and think that teens and adults will appreciate the others.

I'm not entirely sure, though, that I feel compelled to seek out the rest of the books in the series. From what I've read about the rest of the sequels, it seems like the series devolves into a bit of a Mormon-lore inspired fantasy that verges on preachy. (Then again, would anyone say that if they didn't know about Card's faith?) If any of you have read them and think I should continue with the series, please comment - I'd love to get your opinion.

I love to get comments and welcome them on any of my posts. There is comment moderation on posts older than 14 days, but your comments will appear immediately on current posts.

Due to th eabsolutely insane number of spam comments I have been getting recently, I have unfortunately had to turn on word verification. Please email me if you have problems posting a comment.